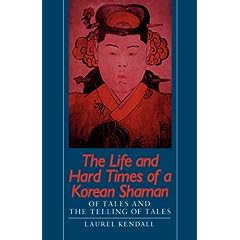 Across the board, it is hard to deny certain continuities of East Asian folk religion. In Taiwan, some so-called “Daoist” rituals are very much akin to those described in The Life and Hard Times of a Korean Shaman delves into Korean folk religion. Spirit mediums (media?) are posessed by the spirits of ancestors or other local gods and dictate demands, other times they reval imbalances in the spirit realm caused by the living. Divinations are cast and shamans (mansin) are consulted to understand why fortune has run out, what the root cause of a particular sickness is, or what plans are most pleasning to the spirit world.

Elaborate rituals are performed in rememberance and honor of ancestors and local dieties. If these are not performed, the forgotten diety may become angry and cause personal fortunes to change and mishaps to abound.

In Taiwan, for example, the ancestors are venerated in shrines and rituals throughout the year. Opera is performed for the benefit of local gods, and graves are swept and kept clean in Confucian tradition to revere the ancestors and keep them happy.

In Japan, family altars enshrine those who have passed away. After cremation, a wooden tablet engraved with the dead’s assumed Buddhist name is placed on the shrine, often with a picture of the deceased. Offerings are given at the memorial of a person’s death, and can include fruit, sake, beer, or other favorite items that the person enjoyed while living. Children are encouraged to show their grades to the deceased grandparents or parents, and prayers are said to the ancestors.

While Confucius did not create any particular religious system, he did advocate the veneation of the ancestors to keep harmony among the living and to keep people tied to the past.

An example of this living tradition today can be seen in a conversation my wife had with a student in Japan. A college student expressed her displeasure with her major, and her frustration. My wife asked why she couldn’t change her major. The student responded that her grandfater would be angry with her. When my wife encouraged her to speak with her grandfather about it, because surely, he’d understand, the student said that she could not do so. When my wife asked why, the student replied, “Because he is dead.”

Another example of this in anime can be seen in the 3rd through 5th episodes of Bleach, or in the first manga. Inoue Orihime’s brother becomes a “hungry ghost” or “hollow” because she forgets about him and forgets to pray to and for him. He comes back to attack her after he is absorbed by other greater negative spirits due to his sadness and attachment to this world. His soul must be purified so that he can pass on. When he is purified, Orihime remembers to pray in front of her shrine to keep him involved in her life.

Many examples of ancestral veneration will be familiar to the student of Chinese and Japanese religions.

Upon reading about the individual account of a particular Korean Shaman known as Yongsu’s Mother, I began to see deeper levels of the individual connection to the dead and the spirits in the Sinosphere. This particular shaman had all sorts of trouble due to strange and fractured relationships with living family members. When they passed on, once she was a Shaman, she needed to keep these spirits happy by according them proper respect within her shrine, giving them offerings, performing spirit dances under a form of trance, and keep them remembered in elaborate rituals known as kut. If she did not do these things, bad luck and misfortune came her way. She was not immune from the whims and the desires of the spirits she served and consulted on the behalf of others.

Also, this Shaman’s take on Buddhism was oddly different from formal Buddhism. Buddhist saints could possess this woman’s mother (and apparenty others) at will. Buddhist images were venerated in the ancestral shrine. One Buddha image that was given to Yongsu’s mother was taken from her by her sister, and she was relentlessly pursued by this Buddha image for a period of years until she was led to its location by her divination practices. Once she regained the image and put it in her shrine, she was finally at peace.

It struck me that she was almost enslaved to these spirits, that they were demanding and capricious. On top of that, the problems she had with them while they were living, seemed to intensify and follow her when they were not. It seemed like there was no freedom from them, even after repeated veneration and respect.

Maintaining harmony must be hard work!

In Taiwan, people leave offerings of food, cigarettes, and alcohol on the streets at certain times of the year to keep hungry ghosts away. In Japan, I have observed small street shrines to local gods and other Boddhisatvas (Buddhist saints) with offerings of coins, sake, incense, and trinkets of all sorts. Now, I have learned that there are various forms of this type of belief in Korea. Folk religion, while crusaded against in Mao’s China, also has taken root in the post-Mao regime. The influence of Confucius’s take on ancestral veneration and folk religion itself is undeniable.

One final thought: I remember having a conversation about religion when I was in Japan a few years ago. I was talking to a student about his beliefs and he asked me about mine. I talked about what I believe, according to the Christian scriptures. He was interested in what they said and wanted to read more. I gave him a copy of my Bible and talked to him about it some more. The next time we hung out, he said that he hated the Japanese gods.

I asked him why he would hate his gods?

He replied that he did not like that they were angry, would do evil things to them if they did not respect them correctly, and would send taifu and disasters on them. I asked him what he thought of the scriptures I gave him. He said he liked them very much, but couldn’t believe in Jesus Christ. I asked him why, and he responded, “Because he is too good. And besides, I am Japanese.”

One thought on “Religious Continuity”