[HTML1]
In case you wanted to remember all of the stations! Anyone ever do this for the E train?

This is funny stuff! Apparently McDonalds Japan is using this dorky guy as a specimen of Gaijin mascotry. Makes me think of the PC guy in the Apple commercials. As the Japantoday.com website notes:

Arudo Debito, the chairman of the Foreign Residents and Naturalized Citizens’ Association of Japan, for being “white, dorky and speaking mangled Japanese” which the group feels plays to Japan’s xenophobic tendencies. TIME reports that Debido has officially protested the Mr James campaign with a letter to McDonald’s Corp headquarters in Illinois.

Could you imagine using a dorky Japanese guy to advertise sushi? No? Because hot people eat sushi and nerds eat at McDonalds? Kind of preposterous. Hold on…I eat both…wait…am I going to have an identity crisis?

So this is what they think of Gaijin? 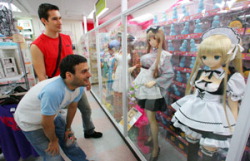 After writing about the “4 Gregs,” I got into a conversation about American Otaku culture as “Cultural Slumming.”
There may be something to this. Slumming can be loosely defined as the people of a particular cultural group, usually a higher socio-economic class patronizing an area or establishment that belongs to a different socio-economic class or culture. The incoming group has no context for the lives of the people that they seek to interface with for a short while, and then leave.

A good NY Times article from 1996 discusses this phenomenon in regard to the romanticization of the poor, the AIDS victims, the homeless, and the downtrodden found in those who were raving about the broadway musical, Rent. Solidarity with the poor and sick, is it really authentic when someone runs in, tries to live the life for a day, and then leaves? It’s like the young women who want to be Yamambas for a day in Tokyo, taking on a cultural persona for a day, and then going back to their “ordinary” lives.

Is it a form of escapism, perhaps akin to playing a video game, or indulging in some type of fantasy movie or novel. When the game is over, you go back to whatever you were escaping from.