If you are interested in seeing “Jiro Dreams of Sushi”, you might like to know more about this film’s connection to Japanese culture. The following is a short introduction I wrote after screening the film this week.

Imagine, if you will, day in, day out doing the same exact job.  Imagine performing the same tasks without fail, nonstop. Imagine never complaining about it for one simple reason. It is not that someone is looking over your shoulder. It is not because you are trying to set a good example for those around. It is because you absolutely love your profession.  Imagine having reverence for every aspect of of your job, from the raw materials you select, to the masters you work with, to the tools you use.  Imagine dedicating your entire being to the perfection of one thing: your vocation, or in this case, more than your vocation, your very life’s art.

In the film you are about to see, you will encounter an 85 year old chef, whose way of life is dedicated to providing others with the most exacting, succulent, perfect sushi.  This film demonstrates Zen aesthetics found in traditional Japanese arts.  Ideas such as: less is more, what is absent is more important than what is shown, living fully in the moment is better than waiting for the future, and perfecting the practice of a discipline. These characteristics sprang from samurai and their code, Bushidō, or “The way of the warrior.” Samurai embraced austerity, discipline, hard work, and mental preparation. While the samurai are long gone, such values still hold sway in Japan, even as they practically vanish, living on in the cultural imagination.

But not so with Jiro; he embodies these principles, thereby becoming an example to us all.  This gentle man, who is so dedicated to his dō, his way, his practice, is certainly an inspiration as he “dreams of Sushi.” His example to us is that indeed, hard work, a dash of innovation, and pounds of perseverance will pay off in the end. Jiro’s courses and arrangement of the meal are described by a food critic as a “concerto,” with an ebb and flow inspired by kaiseki ryōri, an delicate form of traditional Japanese cuisine that goes back centuries. Imagine fare so fine, so exquisite, that it’s like consuming the chef’s “philosophy with every bite.” To be sure, it is a joy to see an accomplished artist’s work, to hear a virtuoso’s performance. Likewise, to eat a sumptuous meal at the hands of a master.

On the one year anniversary of the horrific earthquake and tsunami that stole away so many lives, it is comforting to see these important elements of Japanese culture, to see the expert preparation of these mouth-watering gifts from the sea. While so much of Japan’s coast has been devastated, the Japanese people have been persevering with strong spirits and brave hearts–just like Jiro. So, while we may not be able to travel to Japan and indulge in Jiro’s masterwork, we can at least get a glimpse into his world…and marvel. I hope you will enjoy the show!

One of the key questions we can ask ourselves today is regarding what it means to be human. Somehow, after the Enlightenment, many modernists lost sight of true humanity. Instead of asking how to live authentically, philosophers and literati began g questions about how to live perfectly. Instead of understanding the truth of the human condition (humans are intrinsically flawed and at some point, the mythical promise of scientific progress will cease to deliver), modernism sought to subjugate nature and humanity into a variety of visions that were highly mechanized and looking for earthly perfection.

Somewhere in this path towards perfection, we lost much of what true humanity is all about. We do not love our neighbors as ourselves, and we constantly are trying to wear the mask of false perfection as we disassociate ourselves from the messiness of deep human relationships and flesh-based community. We ignore our own imperfections as we readily point out, then distance ourselves from, the perceived imperfections of others. This tends to cause community breakdowns and the loss of self as we attempt to live inauthentic lives.

Those of you who are familiar with Heidegger and Ponty will no doubt recognize where I am going with this.

Abe Kobo’s “Box Man” takes these issues and repackages them in a surrealist novel. The major themes of this work revolve around alienation from society, denial of identity, loss of community, and the inability to create lasting, meaningful relationships in the modern world. The modern world so fails the box man that he must disconnect from it to become an ineffectual voyeur in order to find a deeper meaning in his newly discovered world. This world is perceived through the slit in the box he wears, giving him a unique vantage point, and the ability to create a window from which he may view the world, no matter where he finds himself. The box allows the box man to be in a quantum state of neither human nor non-human, neither alive, nor dead. The box makes the box man a pariah while being unremarkable. It allows for the dualistic tension we find in much postmodern philosophy.

My jury is not yet out on everything that is going on in this work. It seems to strongly connect to Okakura Kakuzo’s worship of the imperfection. Regardless, this disturbing novel is an important work, especially in light of contemporary otaku studies. 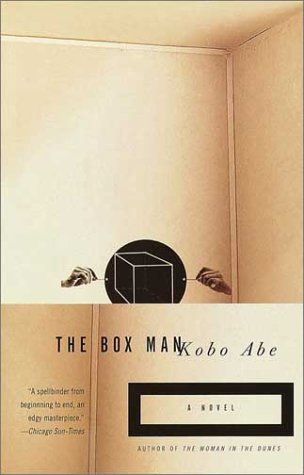