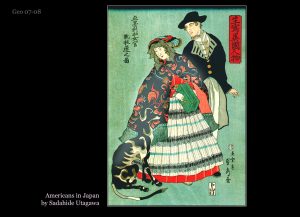 The cultural slumming of the American otaku is somewhat different from slumming as defined in the last post.

NYU professor Tavia Nyong’o, who is teaching a course on sub-cultures, referencing a book by Ken Gelder, (Subcultures: Cultural Histories and Social Practice. London: Routledge, 2007) says that otaku culture is a slumming based on our modern capitalism. She also references Peter Hitchcock (“Slumming” in Passing: Identity and Interpretation in Sexuality, Race, and Religion, Sanchez and Schossberg, eds. New York: NYU Press, 2001), saying a “slummer is a person who can [sic] “fantasizes what the culture otherwise hide.” Nyong’o also asserts that otaku as consumers are no different than slummers. In other words, their persona is fueled by the desire to acquire goods and trinkets that somehow help create the persona. Or is it more than that?

The difference between slumming and experiencing a culture is, in my opinion, a matter of perspective and how you approach what you are doing. Are you going to a place just to get as much stuff as you possibly can? Do you just want a stamp in your passport? Do you want to pretend to be something you are not? Or are you fascinated by something that you have encountered? Do you want to know more about some aspect of that culture because you love the people, the place, the smells, the sights, the sounds? For some of us, our international travel experiences are a mish-mash of all of the above. Studying abroad exposes you to so much for just a few months; you are bound to come home changed and have new tastes and desires.