The other day, I was helping one of our faculty in the Center for Hispanic Studies publish a narrated web presentation, a good portion of it concerning God’s First Commandment: You shall have no other gods before [YHWH], as found in the book of Exodus, chapter 20.

Many of the slides contained familiar imagery, but one particular image caught me off guard and unsettled me greatly: 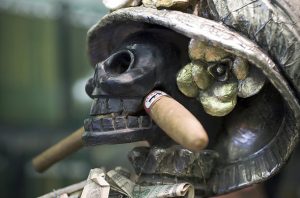 I kind of gasped. Intrigued, I asked the professor just what I was looking at. He said that it is an image of Santa Muerte, or Saint Death. The Santa Muerte cult, he went on to explain, is growing in Mexico and has been coming into the USA with waves of migrants. The followers of this cult have home altars with an image of this goddess and burn candles, and recite prayers. They will offer up various “sacrifices” or gifts to this goddess, such as money, tequila or other alcohol, cigarettes and cigars, and food, to name a few items. Prayers to Santa Muerte are usually for things one would not ask the Christian God or even a saint for, such as protection when committing a crime, (which explains the popularity among the smugglers, kidnappers, drug traffickers, prostitutes, and some planning a border crossing,) or sending away a lover, or even for the love of someone, the death of an enemy, or material blessings in business. There are different configurations of this god, wearing a gold robe, white robe or red robe, black robe, and sometimes blue. Each color has a particular meaning, such as gold business or red for love, or black for protection from curses and magic arts.

I had no idea.

The Santa Muerte images often look like a grim reaper, a robed skeleton with a scythe, holding a globe or apple in one of the hands, and having a gold crown on the head. 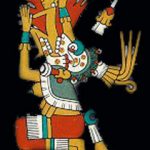 Some researchers and anthropologists link this cult back to the indigenous Aztec goddess, Mictecacihuatl, who is depicted as a female form with a skull for the head. Worshippers of Mictecacihuatl and her husband, Mictlantecuhtli, are believed to have desired the power of death itself. Offerings are said to have been the skin of dead human sacrifices.

Yet, interestingly, the suspicion is that people who pay homage to Santa Muerte and ask to have favors given must return favors, and each favor must be greater than the last, more lavish gifts, etc. If the favors are not returned, bad things will happen to the negligent, such as death of family members, or the original recipient of the boon.

Sounds a lot like traditional Chinese folk religion concerning hungry ghosts and bad spirits. During the Hungry Ghost Festival, Offerings of fruit, cigarettes, alcohol and other goods are left at various shrines or even in the street at various times of the year to placate bad spirits and hungry ghosts, lest they make trouble for a family. 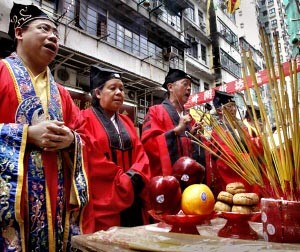 Ancestors must also be placated, prayed to, remembered, and given offerings lest they become restless and do harm to the family who has forgotten them. Some believe that ghosts cannot cross water or travel in lines that are not straight, so many older homes feature gates with zig-zag turns or crossing over a stream of water.

This is clearly evidenced in Japanese popular culture artifacts such as the Bleach anime/manga, Shinigami-kun, Soul Eater, and Death Note (Just a partial list, really.)

Particularly, in Bleach manga, the storyline about Inoue Orihime and her deceased brother, whom she had ceased remembering and praying to. He became lonely in the afterlife and was eventually devoured by bad spirits, k

nown as Hollows. He then became a hollow and started haunting his sister until he appeared to her in his monstrous, changed form. He tried to take her life, and then her soul to ease his loneliness. Since he was not an older, more powerful hollow, he was able to be convinced by his true nature that he did not really want to harm his sister, and had a Konsoh (soul cleansing) performed on him by her recently Buddhist funeral-garb wearing death god friend, Kurosaki Ichigo. The 死神 Shinigami, or death-god, of the Bleach realm, does not carry a scythe, but uses a samurai sword to reap souls.

More research shows that the Shinigami in Japanese manga come from the Tarot card for the number 13, “Greater Arcana” or “Death,” depicted as a skeleton riding on a horse in a suit of armor, or just a skeleton with a sword or scythe. More interesting, and perhaps a mere coincidence, is the fact that there are 13 protection squads made up of Shinigami (Death gods, or sould reapers) in “Soul Society,” the place that the souls of the dead go to pass on.

Now, this is a different look, since they are not skeletal or scary looking; the scary ones are the hollow, the demonic/twisted spirits who live in Hueco Mundo, [Hollow World]. (Interestingly, all the names of the creatures and characters in Hueco Mundo are in Spanish) They generally posess skeletal masks and wear black robe like clothes.

When comparing death gods in Death Note, it’s yet another story. These do look skeletal and creepy, and they esentially gain life by taking human lives by writing their names in notebooks with time and type of death. They live in a barren world and pass away time by gambling and sometimes meddling in the affairs of humans. Either way, they are not a pleasant lot.

While there are interesting connections to be drawn, I don’t know that there is anything conclusive to say about Santa Muerte and Shinigami, other than there are interesting overtones. Perhaps it is just human nature to be afraid of death, so it is easier to try to personifiy death and deify it. The Catholic church is fighting hard against the cult of Santa Muerte, and hopefully they will expose the truth: Death is not a god, not a force. For those who believe in Christ, as it is written, death has been swallowed up by Christ’s death and resurrection, it’s sting is lost forever.

I’m from McAllen Texas, a city at the southern tip of Texas. Mexico is a car ride away. Santa Muerte decals are seen on many cars and trucks. Statues, shirts, and all sorts of Santisima Muerte decorations are sold on streets as you near the border. It does have a lot to do with drug trafficking, and illegal activity. Another similarity between Death Note and Santa Muerte is the apple. In Death Note, the Ryuk (Light’s Shinigami) has a weird obsession with apples, which the SM is usually adorned with, either in her hand, or offerings of apples.

Hi! Someone in my Myspace group shared this site with us so I came to give it a look. I’m definitely enjoying the information. I’m bookmarking and will be tweeting this to my followers! Exceptional blog and terrific design.