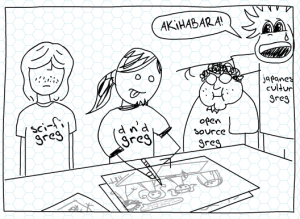 I just watched “4 Gregs” from the folks at Homestarrunner.com.

One of the “Gregs” (There are four guys named Greg who hang out and do geeky things together) is “Japanese Culture Greg.” He keeps calling out Japanese pop-culture words like, “Otaku,” and “Akihabara,” and recommends doing things like looking at vinyl figures. In this parody, the Japanese (pop) culture Greg has been lumped together with Sci-fi, Gaming, and Computer geekdom Gregs. Is this how many Americans see folks who enjoy Japanese popular culture?

More interestingly is that the J-culture Greg is not “J-Pop Culture Greg.” I wonder how much popular culture is seen as the end-all of Japanese culture? When American Otaku go to Japan seeking to embrace their Japanese brethren, Japanese society does not know what to do with them.

Take note: the beginning of the video starts with the word “Kawatta” to describe the foreigners who come to Japan for Otaku culture. Kawatta means, “Strange,” or “Weird.” They don’t know how to understand them, or why foreigners would come to Japan to participate in a culture that they consider odd, an aberration of the group social norms. (For more on this, see Otaku no Video and Genshiken.) It seems that this participation by foreigners in an aspect of Japanese subculture is something that makes those in the mainstream culture uncomfortable. Subcultures are often understood, but when they get exported, and then reimported, a strange thing occurs. It’s almost like a genetic mutation or new child culture, born of two cultures. Some American fans may spout Japanese words they hear, or imitate what characters do in the animation they see, since this is the only brush with the culture that they have experienced, and it’s fun. It’s like imitating lines from movies (and you all know you have!)

For the Americans who enjoy Japanese culture of many forms, there is a sort of camraderie among members of the sub-culture in-group. Perhaps this type of community – an affinity group, really – is something that those on the outside, those who cannot understand, secretly desire while loathing it?

It’s like Americans who obsess over Paris Hilton. Many love her while hating her.

Everyone wants to experience authentic relationships, in whatever form they may be found.

Is foreign heads of state visiting Graceland the same phenomenon in cultural reverse?