Now that I am playing with an iPad, I found the Marvel application. I downloaded the six free issues that they are offering and started to flip through the 1999 Amazing Spiderman issue. The artwork is great as are the colors, but I found myself losing interest after about 10 pages.

Why? I have gotten used to reading Manga, and the action sequences, camera angles, frames, and visual narrative have totally replaced my ideal of what a comic book should be. The Spider Man issue had too many words, too little dynamic action, and just took too long to digest. I was tired and had a long day at work. I wanted to spend a few minutes relaxing, but it felt more like work.

However, a lot can change in 5 years. I also downloaded a 2004 issue of “The New Avengers” and noticed immediately how much more manga had left its mark in such a short time. For one, there were a lot more camera angles, reminiscent of Tezuka’s work. There were zooms out and pans to establish location. Frames were no longer simply boxes; sometimes they were ignored. There were also fewer words, and a lot more action. Rather than a bar scene with one shot and 10 bubbles, there were 5 frames with 2 or 3 dialog bubbles. 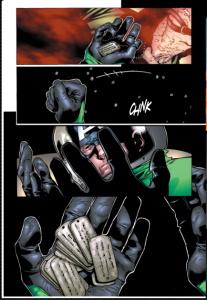 You can guess which comic I read through.

On the subject of manga’s influence on the US scene, I discovered that on the iPad, in the iBook store, you can purchase Roland Kelts’ “Japanamerica”. I looked for other manga related books but didn’t come up with any results. I wonder if Stonebridge will release any titles on the iBook store? I guess many authors might be concerned about intellectual property.

Speaking of intellectual property, I wonder if VIZ will get an iPad app? A friend of mine wondered if some might consider importing scanned images as a way to read manga on the iPad in theory, but, of course, we wouldn’t want to break copyright. I am sure less-ethical people have already done as much?

I wonder, too, why most of the manga titles on the kindle store are ero titles? I am not interested in that genre…I am sure will keep on buying/borrowing hard copies of old-school shonen/seinen titles for now.

Box Men in the 21st Century

After Paprika, we had a panel discussion featuring Patrick Drazen, Roland Kelts, Fred Schodt, and Jeni Prough. Having these